In March 2005 in Cape Town, South Africa approximately 700 judges, lawyers and other professionals committed to children’s rights gathered at the 4th World Congress on Family Law and Children's Rights. 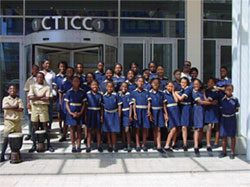 The venue was the Cape Town International Convention Centre. This was the fourth such meeting following the inaugural Congress in Sydney, Australia in 1993; the second in San Francsico, USA in 1997; and the third in Bath, England in 2001. It marked the 15th anniversary of the most widely ratified human rights convention of all time, the United Nations Convention of the Rights of the Child (UNCROC).

Malik, a severely malnourished one-year-old boy, is comforted by his mother, Hawa, in a UNICEF-supported therapeutic feeding centre at the El Fasher Teaching Hospital in El Fasher, capital of North Darfur. Several other women are visible behind them. Courtesy UNICEF. 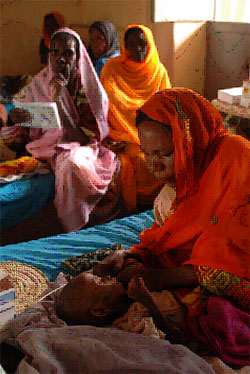 Although real progress has been made since the Convention was adopted, children are still dying in appalling numbers from preventable diseases such as malaria. Some 300,000 are child soldiers, or otherwise victims of the ultimate obscenity, war. Over 1 million are exploited every year in the multi-billion dollar sex industry.

Children are bought and sold by organised crime rings and moved around the world as slaves. More than 14 million are now orphaned by HIV/AIDS; many of these will act as family heads and carry the disease themselves. 65% of the 121 million children in the world who are not in school are girls. Many more million children live in poverty and hunger.

It was these issues and many others that brought together international delegates from throughout the world and in particular from the African continent to review the success or otherwise of UNCROC in its 15 years of operation. 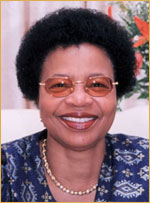 Madam Graca Machel Patron of the 4th World Congress opened the event with a stirring personal call, which had the audience on their feet.

Her message was simple. Don’t hesitate to do what you can as an individual to protect the rights of children no matter how small that act might seem. Do it now was her strong message. This theme concentrated the minds of the delegates in an area where the vastness of the task can often seem almost overwhelming.

Madam Machel had been preceded by the African Children’s Choir who set an optimistic tone for the event with their stirring singing and dancing. The choir had just returned from George in South Africa where they had performed at the 46664 Concert in front of Nelson Mandela and his wife Graca Machel.

"We are all affected by the Aids pandemic. But more than others this epidemic carries the face of women. For it is women who bear the most significant burden of HIV and Aids.…. 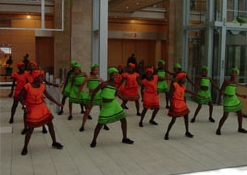 "We must be honest and open about the power relationships between men and women in our society, and we must help build a more enabling and supportive environment that puts the role of women center stage in this struggle…

"Each one of us - sister and brother, mother and father, teacher and student, priest and parishioner, manager and worker, Presidents and Prime Ministers, must add a voice to this call for action…

"Not tomorrow, or the next week - but now…

"You can help break the silence. Talk about HIV and Aids. You can urge your leaders to do more and act now. You can show more care and compassion. You can protect our women and the next generation."

We, representatives of 60 nations gathered for the 4th World Congress on Family Law and Children’s Rights at Cape Town, South Africa from 20 – 23 March 2005.

On the progress of the implementation of the Convention of the Rights of the Child after 15 years.

That the health and education of the children of the world is the greatest guarantee available for the peace and prosperity of the world to come.

And believing that armed conflict is an almost insuperable obstacle to the health and education of children within the area.

Believing that the continued existence of child pornography, especially on the internet, trafficking in women and children, child soldiers, and children unable to receive an education by reason of having to work, and the plight of child refugees is a shame to the world and deserving of the strongest condemnation.

CALL UPON the lawmakers of the USA to accede to the Convention as soon as possible.

The rights of indigenous children warrant robust protection in all dimensions of their lives.

That religious freedom is an important part of a child’s rights.

That many States have made substantial progress in adopting and putting into effect the Convention on the Rights of the Child, but there are still some nations which by reason of poverty, internal strife, or other reasons still have a long way to go in implementing the Convention.

And that significant progress has been made in many countries by direct judicial action in implementing the Convention.

And that direct contact between judges and courts of different nations has been an effective mechanism in some cases for implementing some clauses of the Convention.

And noting the scurge of HIV / AIDS which in South Africa alone appears to affect 5.6 million people.

And that the extensive work is being undertaken globally for women in understanding, educating and challenging their attitudes and actions in matters such as health, sexual behaviours, parenting, status rights and in relationships.

That in some jurisdictions commissioners for children’s rights and children’s ombudsman have been able to play a notable part in the protection of children.

That Children’s Rights International has provided beneficial advocacy and representation in many jurisdictions for the protection of children.

THE CONGRESS HAS RESOLVED:

IMPLEMENTATION OF THE CRC

That State Parties take their commitment to post-ratification more seriously to incorporate the Convention on the Rights of the Child into its domestic law and particularly that pursuant to Article 43 of the CRC State Parties make the principles and provisions of the CRC widely known to adults and children alike by ongoing programmes.

This Congress calls upon all governments to give full legislative effect to the Convention on Children’s Rights in order to give full effect to and enforce the constitutional and international obligations towards vulnerable children.

That bar societies and organisations representing advocates, develop ethical rules / standards of practice and advocacy in Family Law that are consistent with Article 3 and 12 of the UN Convention on the Rights of the Child; and that these rules / standards establish clear expectations for interdisciplinary continuing education.

That the UN adopts accessible and meaningful international standards for the protection of children without parental care.

That governments who have ratified the convention on the rights of the child should be encouraged to allocate sufficient resources to enable courts to implement to the fullest extent the conventions principles.

States and international agencies when formulating and implementing measures and structures to prevent and (when it occurs) ameliorate the consequences of forced marriage. Must have the protection and rehabilitation of the victim as the primary focus and purpose of such measures and Must not, to the detriment of the interests of the victim, be governed by issues of state / public policy or immigration / migration concerns.

That the CRC in its entirety, including especially the right of participation, the right to continuity of care, and the right to cultural and ethnic identity, shall be protected in child welfare proceedings involving indigenous children.

There is a need for interdisciplinary collaboration and dialogue in defining a child’s best interests and such collaboration should be encouraged.

That where possible courts and the legal system should provide for the financial security of children as an aid to their development health and education.

The Congress calls upon the all governments where HIV/AIDS is a significant problem to recognise and urgently address the issue of child sexual abuse in the context of HIV/AIDS through strengthening abuse prevention mechanisms ensuring timely access to post-exposure prophylaxis and counselling for child rape survivors and strengthening the justice system to:

Provide local support which is appropriate to the needs of vulnerable children, in line with national priorities, sustained and properly coordinated.

The Congress urges all governments to give full support to NGOs in delivery of social services.

Children have a voice. What they say is important.

Governments should encourage the promotion and development of the participation of the child in the process since his rights are being examined and decided – making sure his voice is heard.

The Congress calls upon States to include in their national legislation / plans of action:

States should develop child inclusive processes which promote self esteem in children without burdening them with a sense of the responsibility of decision-making.

That family courts should present a consistent message of its condemnation of domestic abuse (DA); and for DA to be reduced and so the home to become a safer place for children and all family members; and for society’s unacceptability and intolerance of DA to reach those who seek assistance from the family court on financial matters; and for the family court to hand down fair, just and socially acceptable outcome.

This Congress calls on all jurisdictions to make Domestic Abuse a factor and consideration in quantum on financial matters on relationship breakdown, wherever possible, and / or provide methods for the family justice system to compensate for the affect of DA on victims from the abusive family member, and for a report on progress at the next Congress.

All States should make adequate financial, social and emotional provision to enable and support victims who wish / need to live away from their family and for community so to do.

That Children’s Rights International commit to look for development of community care systems for successful reintegration and repatriation of vulnerable children who are bonded slaves or are in slavery-like practices in all countries.

That legal and medical institutions throughout the world be called upon to recognise children with transsexualism as experiencing an intersexual condition derived by way of a natural biological variation in human sexual formation rather than a mental disorder.

That legal and medical institutions throughout the world be called upon to recognise the legitimacy of the sexual identity affirmed by a child (male or female) and the rights of that child to have a consistent legal identity (in the absence of that affirmation being derived from a diagnosed delusional disorder) rather than have that sexual identity imposed and not withstanding that such affirmed sexual identity is different from that indicated by one or more of the sexual characteristics of the children.

The UN is requested to adopt and proclaim an International Child Migrants Day on the UN Calendar.

"There is a need to explore the potential benefits of the Hague Children's Conventions for a much wider range of States - including in particular the States in sub-Saharan Africa. With appropriate measures of implementation, (which respect culture which take account of issues of capacity, and in particular the problem of access to legal services and procedures), the Hague Children's Conventions offer a structure for improving inter-State co-operation in the region to protect children at risk in cross-frontier contexts, and they provide access to a rapidly developing global network of judges and other professionals who are devoted to the common protection of children."

Create a framework to make uniform standards to determine a child’s best interests (as opposed to forum selection) in international relocation cases.

That the next World Congress have a program that examines legal education programs (Law Schools) that focus upon Articles 3 and 12 of the UN Convention on the Rights of Children, and interdisciplinary studies related to children in family law.

That the next World Congress have a program that considers:

This Congress calls for commitment globally to understand, educate and challenge attitudes and actions of men to sexual behaviour and relationships and children, and for reports on this work and progress made to be presented at the next Congress.