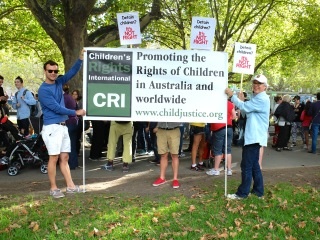 To promote, protect and advance the human rights of children, primarily in developing countries, and to promote understanding of, adherence to and effective implementation of the United Nations Convention on the Rights of the Child (UNCROC).

To achieve these objectives the organization works with the approval of host country governments and in partnership with host country organisations or community groups committed to the rights of children. Such work may be project based and involve education, training, mentoring, monitoring and representation.

CRI has no political or religious affiliations or allegiances.

The activities of Children’s Rights International are governed by a Board of Directors, currently numbering nine members. The Board is chaired by the Hon. Alastair Nicholson, retired Chief Justice of the Family Court of Australia and currently a Professorial Fellow attached to the Faculty of Law at the University of Melbourne. Professor Nicholson has a particular interest in the rights of children, and has written and spoken extensively in Australia and overseas on a number of child related issues. He was the founding Patron of CRI and played a central role in its establishment.

Board Members include Ms Sally Nicholes, a practicing lawyer specialising in human rights and family and children’s law, Ms Leisha Lister, a senior court administrator, with considerable Asian experience, Mr Frank Meredith who has international business experience at a high level in Asia, Ms Margaret Harrison, a legal and social science researcher with experience at the Australian Institute of Family Studies and the Family Court of Australia, and Mr Ben Melin, a senior manager with WHK group, a major Australian accounting firm, The Hon. Paul Guest QC, who is a former Justice of the Family Court of Australia, a member of the Board of the Lasallian Foundation and a former Australian Olympic rower, Mr Charles (Chas) Alexander, a former Executive with the HSBC experience in in the Middle East, North Africa, Central, South and South-East Asia, and France, including establishing the bank's presence in Kazakhstan and Algeria, Dr Garry Warne AM MBBS FRACP, recently retired from the medical staff of the Royal Children’s Hospital Melbourne where for 19 years he was Director of Endocrinology and Diabetes and Dr Judith Slocombe,  a veterinary scientist and currently CEO of the Alannah and Madeline Foundation, whose mission is to keep children safe from violence, with a major focus on cybersafety and reducing the incidence of bullying and its devastating effects.

The CEO of CRI, Mr Bill Jackson, has worked extensively in international aid projects including with the Australian NGO, Community Aid Abroad, now part of OXFAM. He also has considerable film making and media experience, and was previously Director of Public Affairs at the Family Court of Australia.